Parents and children arrive at the entrance of Central School for the first day in the new buildings. 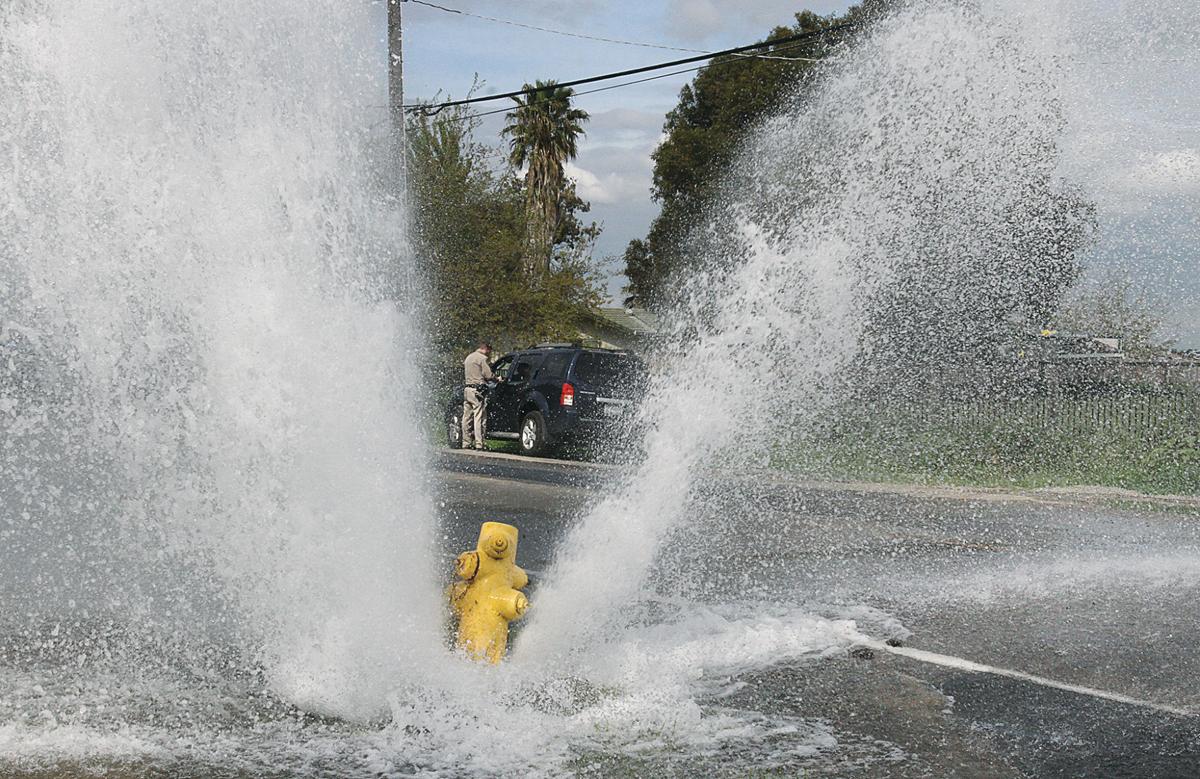 A California Highway Patrol officer talks to one of two drivers involved in an accident at Corral Hollow and Larch roads that left a fire hydrant partially disconnected April 3.

Tracy Police said they were responding faster to emergency calls even as the city dealt with an increase in vehicle-related crimes.

Interim Chief Alex Neicu said the department had received 31,523 calls to 911, a 5% increase over the previous year. Officers handled a total of 73,666 calls for service.

The average response time for a 911 call about an immediate emergency dropped from 7 minutes, 32 seconds to 6 minutes, 52 seconds.

Neicu also said Tracy police made 94 DUI arrests, an 11.9% increase from the year before, and responded to 46 DUI collisions, a 9.5% increase.

Isabella Githere, 13, was named the Boys & Girls Clubs of Tracy Youth of the Year.

The Monte Vista Middle School student had devoted herself to working with club members with special needs in the Inclusion Program.

She was a principal speaker at the clubs’ Appreciation Night, where Dorlane Thrasher and Gene Birk were honored for longtime service on the Boys & Girls Clubs board — Thrasher for 35 years and Birk for 30 years.

A group of “funding gap champions” were also thanked for their major financial and program support that helped overcome a million-dollar loss of federal funding in 2018.

Too dangerous to play outside

A two-car accident that sheared off a fire hydrant highlighted neighbors’ fears about the safety of a rural section of Corral Hollow Road near the Larch Road intersection.

Residents who live near the two-lane road said drivers frequently speed through the area, which has no speed limit signs posted, though it is listed at 45 mph.

About a half dozen homes sit about 20 feet from the roadway, and the owners recounted stories of cars crashing through fences and into trees due to excessive speed.

Someone from the county public works department said they hadn’t had any speed complaints from the residents in the area and urged residents to file their concerns on the county’s website.

Cancer survivors gathered to celebrate during a Relay For Life dinner.

Reegan Snyder, an 8-year-old who had ovarian cancer as a baby, helped fill a banner with purple handprints, one for every year since diagnosis. It would be carried at the American Cancer Society Relay For Life of Tracy-Mountain House on May 5.

Her mother, Jennifer Snyder, would be named the Caregiver of the Year during the relay’s opening ceremonies.

The annual 12-hour walkathon, which moved to Lincoln Park this year, is a way for Tracy and Mountain House residents to raise money for the American Cancer Society.

A two-alarm fire burned through piles of fencing material at Sunset Fencing, filling the sky above 11th Street east of town with smoke and flames through most of the night.

Firefighters from the South San Joaquin County Fire Authority were joined by crews from three neighboring fire departments as they fought to keep the flames from spreading.

Residents and reporters looked back at the murder of 8-year-old Sandra Cantu, who would have been 18 this year.

The little girl was kidnapped, drugged and killed in 2009, and her body was stuffed into a suitcase and dropped into a drainage pond north of town.

Investigators would later name Melissa Chantel Huckaby, 28, a former Sunday school teacher and mother who lived in the same mobile home park, as her killer. Huckaby ultimately pleaded guilty and was given a life sentence.

Cantu’s disappearance and murder drew national attention, and an estimated 4,500 people attended a memorial for the girl at West High School.

A tree and a playhouse were dedicated in her honor at Jacobson Elementary School, the school she attended, and Tracy Celebrates Children, an annual event for children, was created to mark her birthday, March 8.

The $34.2 million construction project began in August 2017 to replace the 80-year-school, one of Tracy’s oldest, with modern classrooms and facilities.

The new campus has 23 classrooms and a library, computer lab and multipurpose room for the 540 kindergarten through fifth grade students.

A May 13 grand opening ceremony drew a standing-room crowd, mostly students and their parents.

The old brick-faced school was torn down over several weeks in late May and June and replaced with a grass playing field along Parker Avenue.